Embracing Your God Given Role

Cougan Collins the minister at the Lone Grove Church of Christ discuss “Embracing Your God Given Role”.

Paul tells us that no matter what a person’s gender or ethnic background is, they are equal in the site of God when it comes to being saved (Gal. 3:26-28). The Law of Moses was for the Jews, but the Law of Christ is for everyone. Those who choose to embrace it become heirs of God (Gal. 3:7).  This equality does not mean that we have the same role within the church. Paul teaches us that even though we have many members in the one body, we do not have the same function (Rom. 12:5). He illustrates this by comparing the function of the church to that of the human body in 1 Cor. 12:12-27.  For instance, if everyone were an eye, there would be no body. If everyone were an elder, there would be no flock. For the church to function properly, it takes both men and women embracing their God given roles (1 Cor. 12:18).  Unfortunately, many people in the religious world have allowed themselves to be influenced by society instead of the Word of God. Because of this, false doctrine has crept into the church and the roles of men and women have been redefined to match that of modern day society. Paul was aware  we would do this because he warned Timothy that people would turn away from the truth and find false teachers to teach them what they wanted to hear (1 Tim. 4:2-4). In the last century, there has been a great push for women to have the same rights as men. There’s nothing wrong with that and I am glad women are being treated as equals in our society. However, today’s society is influencing the church to allow women to take the same roles as that of the men. They will say, “The Bible limited the role of women because that’s what the 1st century culture demanded.” Therefore, they claim that we can adapt how we worship God based on the culture we live in. Is any of this true? To find out, we need to explore what the Bible teaches about the role of men and women and if we are to adapt the Word of God to our culture.

The God given role of women

Many in our society will say, “If a woman cannot function in the same capacity as a man in the church then she is not an equal.” However, this is not true. When you look at the Godhead (Rom. 1:20), namely the Father, Jesus, and the Holy Spirit, Christians would agree that they are equal, yet they have different roles. The Father was the planner, Jesus carried out those plans, and the Holy Spirit was the organizer of those plans. Neither one of them took on the role of the other, yet they were equal. The same is true when it comes to men and women. Men and women have different roles within the church, yet they are still equal to each other. I wish women today would not try to focus in on what they see as limitations. Instead, I wish they would embrace the role that God has given them and use it to glorify Him. Before we examine these limitations, let’s take a closer look at what the roles of women are. First, we will notice women were created to be a helper (not a slave) and companion of man (Gen. 2:18). Women can glorify God by being submissive to their husbands (Eph. 5:22). Peter tells us when women do this, they can win their unbelieving husband to the Lord by their conduct without ever saying a word (1 Pet. 3:1-6). This shows us how important it is for women to be good examples to those around them. Not only can she lead her husband to Christ this way, she can lead others as well. She can also do this by how she manages her household (1 Tim 5:14).  Paul makes it clear that a woman should dress modestly and have good works because it will honor God (1 Tim. 2:9-10). Paul praised the women for being great helpers in the church (Rom. 16:1-4; Phi. 4:3). Women can help the church by encouraging other people, contributing their money, visiting the sick, and just helping out in general. Women are to worship God in spirit, in truth (Jn. 4:24) and sing praises to God (Col. 3:16). They should teach their children the Word of God as Eunice and Louis did Timothy (2 Tim. 1:5; 3:14-15). We also have an example of a husband and wife team teaching another man privately the Word of God (Acts 18:24-36). One role that is overlooked these days is the older women sharing their wisdom with the younger women on how to be stronger Christians (Titus 2:3-5). As you can see, there are many God given roles for women to embrace.

Now let’s examine what roles women are not to do according to scripture. Notice the following chart.

In both of these accounts, Paul is writing about the assembling of the saints (1 Cor. 14:23, 26; 1 Tim. 3:15). It’s easy to see that women are not to teach or take a leading role over the men. When Paul states the women are to be silent, this does not mean absolute silence. If it did, women could not so much as sneeze or cough in church. It simply means, she is not to speak or teach in a way that would violate her gender role in a mixed assembly, such as being a public teacher or leading in someway over the men. Paul gives two reasons women have not been given these roles. First, there is the order of creation. Adam was formed first, then Eve. In his letter to the Corinthians, Paul points out that the head of Christ is God, the head of man is Christ and the head of woman is man (1 Cor. 11:3).  Second, it was Eve who was deceived by the serpent and not Adam. To further show that God does not want women to lead or speak over men in the church, Paul teaches that only men are qualified to become elders and deacons in the church (1 Tim. 3:1-13; Titus 2:5-9). However, it is essential that these men serving as elders and deacons have wives that embrace their God given roles. It’s also interesting to note that Jesus did not choose any women apostles, and there are no examples of where a woman was allowed to teach or lead men in the church. In fact, the word “preacher” and “evangelist” are never used in reference to a woman. The only two places we see the word “teach” or “teaching” used in reference to a woman is when they were forbidden to teach over a man (1 Tim. 2:12) and when the older women are told to teach the younger women (Titus 2:3-4). The Word of God is clear on this and women should rejoice in the role that has been given to them instead of worrying about the roles that have been given to the men.

Changing worship to harmonize with culture

Some in our society may agree with everything that I have stated so far. However, they have come up with a creative way to get around what was taught in the 1st century. They will say, “Paul’s writings simply reflect what was sociably acceptable at the time and he uses the word “I” suggesting that he was making a personal judgment call. Since culture changes, we need to change the way we think and incorporate what culture views sociably acceptable.” This is dangerous thinking because it takes away the authority of the Bible and allows it to be changed based on culture. This opens the door wide open to every sinful act that culture views proper as being acceptable in the church today. John tells us not to love the world (1 Jn. 2:15), yet that is exactly what we are doing when we change the Word of God to harmonize with our culture. Going back to our chart, when Paul said, “I do not…” he was not making a personal judgment instead he was stating a command from God. First, we know that Paul spoke by the inspiration of the Holy Spirit (1 Cor. 2:13). Then Paul makes it clear that the things he said in 1 Cor. 14, encompassing the women being silent, was the command of the Lord (1 Cor. 14:37). We also know that Paul taught the same message in all the churches, not just one (1 Cor. 4:17). Paul was emphatic that everyone teach the same message (1 Cor. 1:10; Phi. 1:27, 2:2) and not to add or take away from the Word of God (1 Cor. 4:6; Gal. 1:8). Paul told the Thessalonians to holdfast to the tradition they were taught either through word or epistle (2 Thes. 2:15) and to mark and withdraw from those who do not walk according to that tradition (2 Thes. 3:6). Throughout the letters to Timothy, Paul wanted to make sure that he would guard the truth and not allow it to be compromised (1 Tim. 1:3; 4:6, 16; 6:14, 20; 2 Tim. 1:13; 3:10,14; 4:2-5). Finally, Paul tells Timothy to take the message he has learned from him and commit it to faithful men who will be able to teach others also (2 Tim. 2:2). The Word of God makes it clear that we are to live our Christian lives based on the pattern that is found in the Bible. The Word of God in no way supports the idea of changing the roles of men and women because culture demands it.

The God given role of men

Men have been given the responsibility of being the spiritual leader of the home (Eph. 5:23-31; Eph. 6:4) and of the church (1 Tim. 3:1-13; Titus 2:5-9). Men need take their God given role seriously. Perhaps the reason so many women have been tempted to take the role of men in the church is because there are not enough men fulfilling their roles. Men have been influenced by society to step back and let the women do the work while they take it easy. I firmly believe that if more men will embrace their God given roles as spiritual leaders of the home and church, then we wouldn’t have these problems with the role of men and women in the church. Obviously, not every man is going to be a preacher, elder, or deacon. However, every man should be the spiritual leader of the home. As we grow spiritually, we will naturally take on more responsibility such as leading in prayer or serving on the Lord’s Table.

In conclusion, men and women in Christ need to embrace their God given roles. Different roles in the church do not make one person more important than another because we are all equal in site of God. We need to live our Christian lives based on what the Word of God says and we cannot compromise the truth because of culture.

Matthew 7:21 “Not everyone who says to Me, ‘Lord, Lord,’ shall enter the kingdom of heaven, but he who does the will of My Father in heaven. 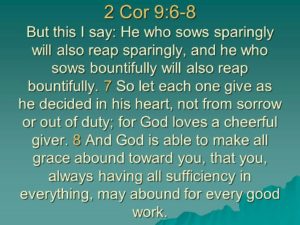